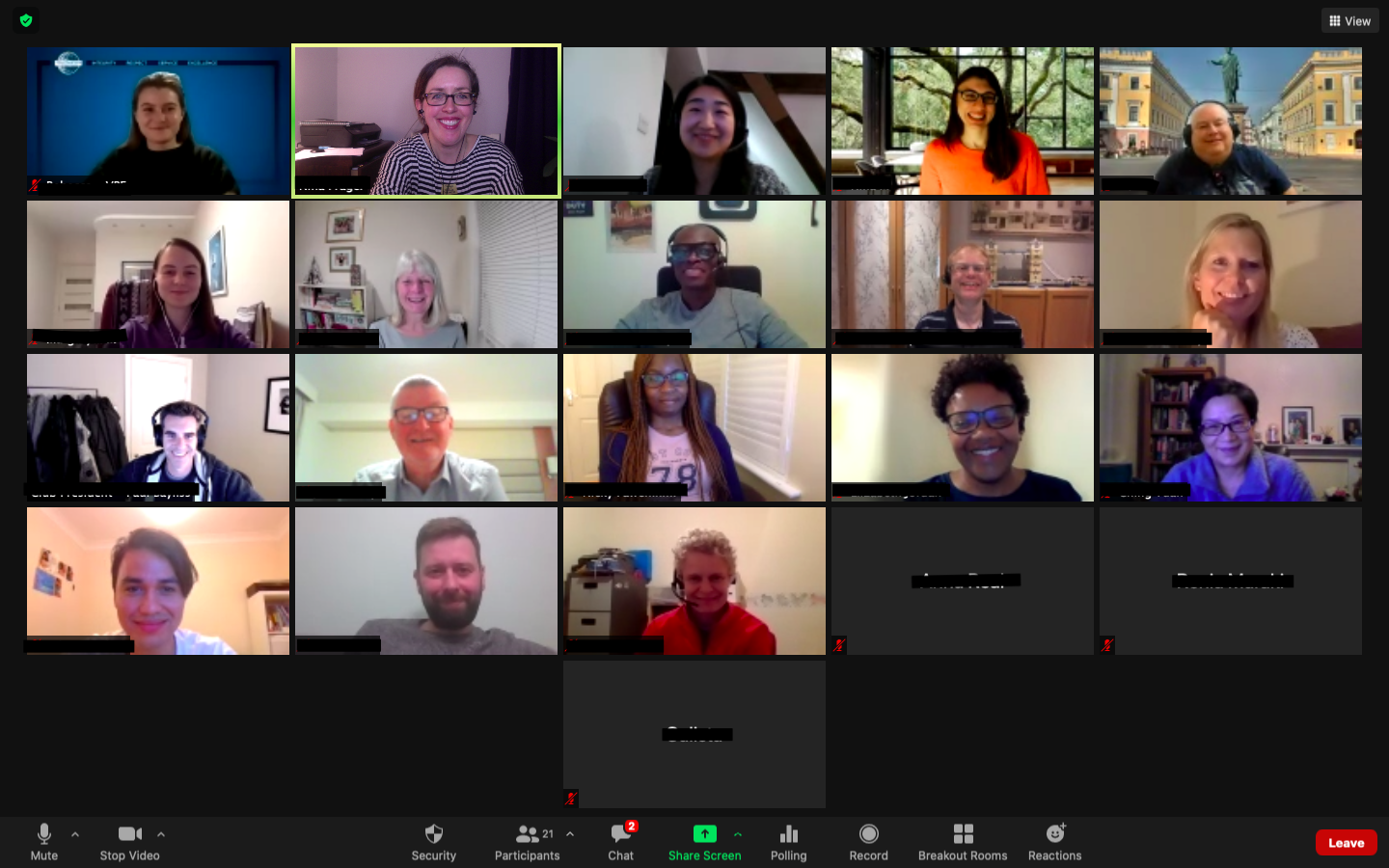 Steve Campion  took us back to 1924 when Ralph Smedley from California founded Toastmasters. He reminded us of Toastmasters’ mission – to make leaders.
As a seasoned speaker, Steve wasn’t vexed by his internet connection being intermittently broken by a thunderstorm. In fact, he said, “It’s bright and sunny because I turned my lights on.” A true demonstration of making lemonade out of lemons!

Our VP of Education Rebecca Wigmore made another slick presentation about the Pathways learning programme.

In her speech entitled Upfront, Nina Prager shared a personal story about becoming more confident. After being made redundant on maternity leave, she decided to  join Toastmasters and take a course on building confidence, and has shared some insights with all of us. First and foremost, confidence is something that anybody can develop, it’s not a trait you are born with. (Even Kevin wasn’t born a great speaker – he honed the skill through hours of practice.) Confidence is not a fixed quality, but one that ebbs and flows depending on the circumstances. Equally, don’t worry that you need to “fix” anything about yourself  to become confident: you can be your full self, yet a more confident version. What are some practical steps you can take to improve your confidence? First, don’t over-apologise; instead, turn your sorry’s into thank you’s. Try not to use the word “just” in a way that belittles your message. Also, don’t diminish your statements with phrases like “Does this make sense?” or “I’m not an expert…” And lastly, get feedback and support and do the scary thing – this is where Toastmasters comes in. Confidence is something even the most experienced speakers can work on, and Nina’s simple yet effective tools were well received by the audience.

In his speech entitled, I Want To Be Bourgeoisie, Kevin Baggs narrated his attempts to join the upper class. First, he got his nails done in Ware – but the euphoria was fleeting; it wasn’t enough to make him a true bourgeois. Then he started having his shopping delivered, only to be joined by thousands of proletarians when the pandemic hit. Finally, he found the answer. Andrex wet-wipe toilet tissues – cotton-fresh fragrance! But the idea of having a scented backside was a bit disturbing, so Kevin concluded that bourgeoisie isn’t all it’s cracked up to be. We are happy to see him back among us, plebeians.

Anna Xiao conducted a Monopoly-themed table topic session inspired by Peter Lane’s speech from the last meeting. The questions varied from the practical to the philosophical…

Andy Cowan was asked: Which came first – the chicken or the egg? In a great example of thinking on his feet (literally – he was standing), Andy came up with the answer: oyakodon. A Japanese dish consisting of chicken and egg. You can’t have one without the other. They go together. Needless to say, Andy won table topics with that one!

Carl Glover was asked about a time he showed patience. With two small children, it’s no wonder that Carl had many examples up his sleeve… But he was also patient with a new hire at work, taking time to answer numerous questions.

Fabio Sanchez was asked about his experience of saving money. We learned that he did that at a very young age, being the real bread-winner of his family. He also left home at 17, further honing his financial skills.

Bianca Brinkley doesn’t see herself as competitive, even though she was one of four growing up. This may be changing now, since she has children… and is eligible for the next humorous speech contest at Toastmasters!

Nicky Fawehinmi described all the benefits of a cashless world. You don’t need to carry a handbag, you can trace all your expenses, and it’s great for the environment. Thumbs up to a cashless world!

Anna Real, our guest from Belarus, was asked about a time when she was lucky. But Anna sees herself as lucky on a daily basis – since she is most grateful for her family and children.

Ching Yuan isn’t too proud to ask for help – she regularly enlists the help of colleagues to understand Excel and other matters. So, as our last speaker, she wasn’t caught off guard and he had no trouble answering the question.

Elizabeth Jordan invited us to the District 71 conference on 21-23 May – featuring world champion speakers and great presentations on a  multitude of subjects, it’s not to be missed (sign up here)! And we can also cheer on Ryan Parke from West Herts Speakers who is competing in the Evaluation contest.

Elizabeth also praised Nina Prager’s newsletter for the conference as “the best one we ever had”, making us all very proud!