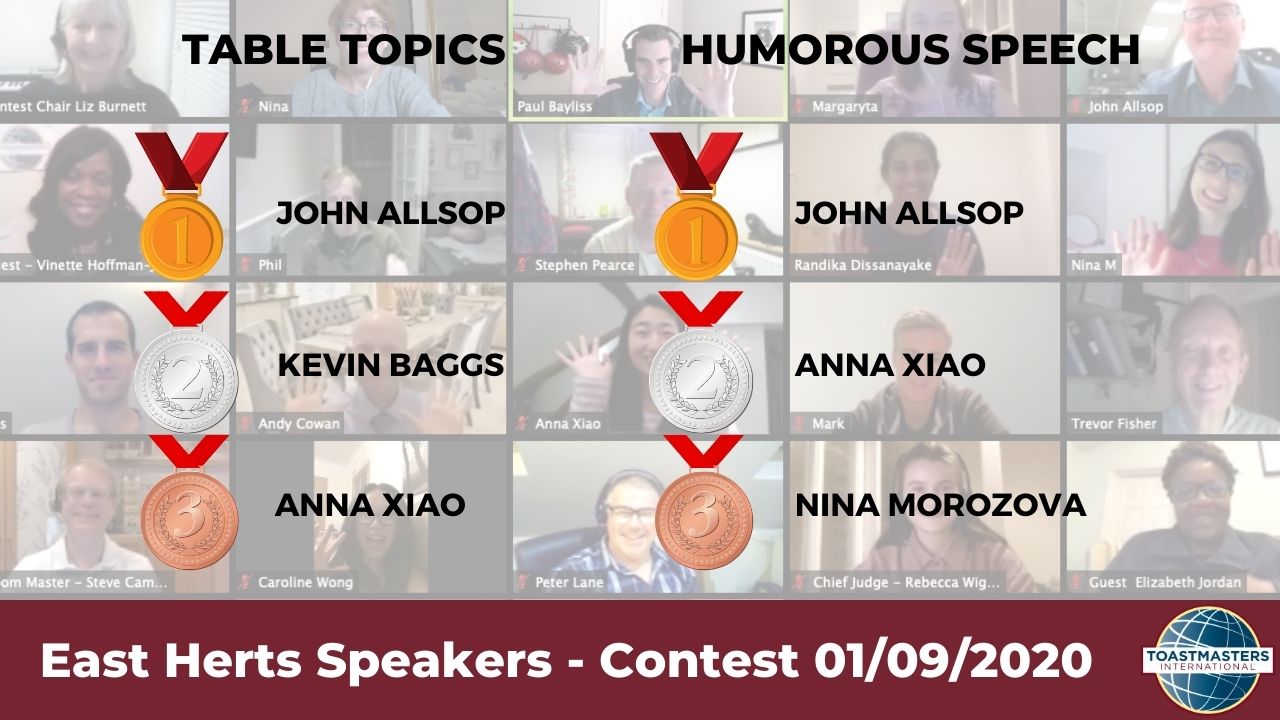 On Tuesday, we had our Humorous speech and table topics contest. And humorous it was! We saw laughter tears in the audience!  We had plenty of guests, from other clubs, Ukraine, and even Hoddesdon! Elizabeth and Vinette joined us, it was great to see you! And we had Adeel join, who we missed a lot in the last months!

Organising a contest is a lot of work. A big thank you to Rebecca, Liz and Steve for the seamless organisation and facilitation! We’re in awe how smoothly the contest ran! Not one glitch!

Now, let’s have some fun!

Nina M had us cracking with her speech Finding The Silver Lining In 2020! I think we can all agree that it is really handy being able to paint your nails during camera-off zoom meetings and that we can all learn to cook like Jamie Oliver had we just the time! During lockdown, she experienced  an overwhelming delicious sense of freedom. Big words!

He was our next contestant. He told us about her Secret Identity. Her Chinese name being He, her mother soon realised this might be problematic in the UK and renamed her Anna. Despite this, He had to go through a few very funny and character building incidents at school. And as if this was not enough, He’s name can even be confused in China, when a different pronounciation  makes it a dog’s name. Anna, He, we love you both!

John told us the story of his Brexit negotiations the very first team building event after his British company was taken over by Italian & German owners. What a combination that is! This was as funny as it sounds! The Italians cruising along their beautiful coasts, the Germans speed down their Autobahn at 120+ mph and then there is John, on the A10… Hilarious! Despite all the cultural differences, Diversity Matters had a happy end, the company grew together.

Last up on the stage was Paul with Plan B. He intended to tell us an epic sequel to his camping holiday last year, but the weather was being British, so we learned about Plan B and his other adventures, going back to a visit in Ware waterpark. Surviving  an almost-concussion, almost-food poisoning and almost-Covid/real-man flu. While we are certain that all this wasn’t funny as it happened, it certainly was now!

Question: If you could be any age again for 1 week, which age would it be and why?

This was the question all table topics contestants had to answer.
Each answer was truly unique and truly awesome in their own way. How would you have answered this?

John answered:  Age 15. Because it was such an exciting time for him. And also because his grandson is 15 and he would like to be guidance and support  and by experiencing this time again he could be better at that.

Why we love this answer: Because it shows John true colours: Wanting to help and coach.

Andy answered: Age 14. Because he would enjoy sport so much more at this age. Also to being able to understand his son better, who is 14 and who lives in Japan, so Andy does not get to see him often.

Why we love this answer: Because Andy loves his son and tries to understand him better, even though he is far away.

Anna answered: An age between 5-9. Because it hits the sweet spot of already being  able to make your own decisions, but not yet in the grind of school and grades.

Why we we love this answer: It sounds like overwhelming delicious freedom.

Nina M answered: Age 10. Because she would be back in her home country Kasachstan and could make a plan to become an Astronaut.

Why we love this answer: Because Nina wants to go back and coach herself to the stars. Very creative!

Stephen answered: Age 35, specifically the week he got married. His wedding and the day after were the perfect days for him.

Why we love this answer: Because Stephen shows his big heart.

Kevin answered: Age 150, 20, 35. Kevin started to analyse pros and cons of different ages and even considered being older.

Why we love this answer: It’s clever and thinking outside the box.

It was an amazing evening! All contestants did exceptionally well!